About two months ago I started to get that itchy feeling. No, not the “Oh my god, it’s the dead of summer and there are a million mosquitos” itch. The “it’s been so long since I’ve gone on an adventure” itch. My last adventure was to Seattle in March, and though I had traveled a few times since, it wasn’t quite fulfilling my wanderlust. Going to Bubbi’s isn’t exactly going to a world full of opportunity (though it is generally full of delicious foodstuffs).

One of my best friends from college, Kathleen, got a job as a web designer down in Memphis starting last June. Every time we spoke, she told me about how cool it is (and how cheap it is compared to NYC). I saw her apartment over Google Hangout, a beautiful apartment in a house built in 1910, with chandeliers in every room. I haven’t spent any real time in the South, other than a stopover at the Atlanta airport last October. I was born in Florida, but not “Southern” Florida, which pretty much only constitutes the panhandle.

By late June, I decided it was time for a change. I knew I’d have a ridiculous amount of days off for the Jewish holidays in September, and figured now is the time to go on adventure. Memphis ticket prices went down, and I took it as my sign to “Buy buy buy!”

I arrived in Memphis on Friday night. The airport was filled with the smell of barbecue and flight attendants saying “y’all.” When I got into Kathleen’s car, we went off to our very important first meal of Memphis at Central BBQ. I had envisioned what to expect, but nothing can quite surpass that first bite of sweet, smokey pulled pork. And boy did we get a big helping.

Kathleen’s apartment was even larger than I had grasped over Hangout. To put it this way, about two and a third of my NYC apartment would fit inside of it. It was utterly enchanting, with its crown moldings and exposed brick. Plus, a beautiful new washer and dryer (every New Yorker proceed to gasp and pant). The house was designed pretty much exactly the way one would picture Southern architecture. It’s entirely white with a large front porch. Kathleen lives in the main house, but a former servants’ quarters existed out back, also full of apartments. These two homes are the only two on the street to be converted, with each of the others being occupied by young families.

The weekend was full of various Southern adventures. On Saturday, we hit up the Pink Palace Museum, and oh yes, it is indeed a gigantic pink mansion. To give some context, it’s like they put a big chunk of the Natural History Museum on the first floor, and skipped ahead to the 1800s and Memphis history on the second floor. Children were running around the exhibits, excited by the animatronic dinosaurs and the real life skull of a bison. My bread and butter was certainly the history of the once vibrant city. Memphis had lost a huge portion of its population after the Civil War due to a breakout of Yellow Fever. Though it began it’s revival, racial tensions and extreme poverty has led the city to be mostly abandoned. 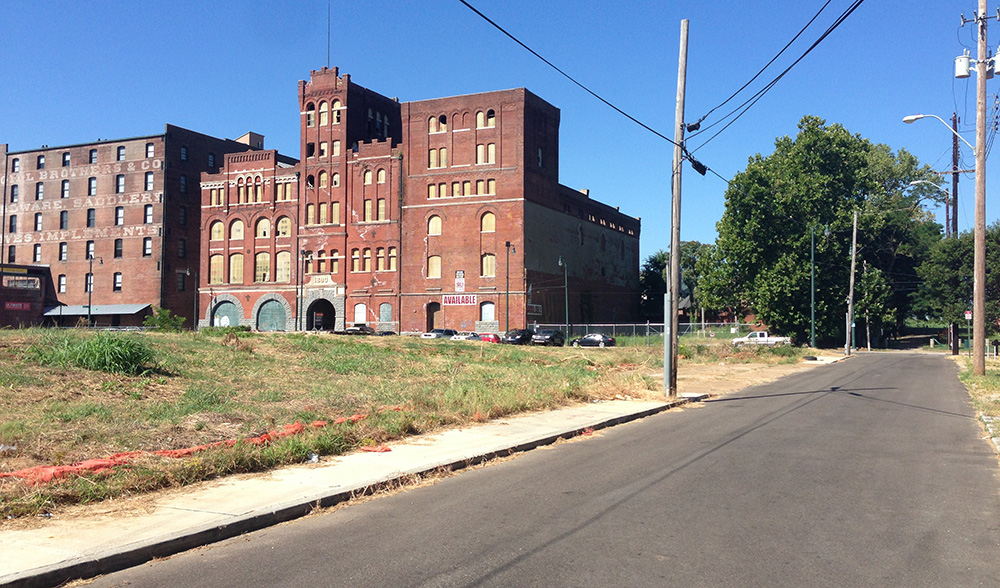 Memphis has annexed the suburbs to boost population numbers, but still hovers around 650,000 (U.S. Census Bureau). Though that’s hardly insignificant, it’s not much. But perhaps my judgement is clouded coming from a borough with over four times that (2.53 million).

We took a break from knowledge gathering to go to a Memphis staple, Jerry’s Sno Cone. According to Foursquare, the treat to get was the Wedding Cake supreme. Way to go Foursquare, you rocked our taste buds. The “cake” ice was red, and tasted like a cross between red velvet and a vanilla cake (contradictory, I know, but you’ll understand if you have it). The “supreme” was thick vanilla soft serve in layers between the ice. Note for future me: Try it with chocolate soft serve next time.

We also took a ride to the Civil Rights Museum, located at the Lorraine Motel. If that doesn’t ring a bell, it’s the place where on April 4, 1968, Reverend Martin Luther King Jr. was assassinated. We walked through the exhibit, re-learning about all of the important history that led up to that moment. We stood outside of the bathroom that James Earl Ray used to shoot MLK. We read about the evidence used to convict him, along with the conspiracy theories of other involved parties such as Memphis Police and the FBI. We spent a lot of time reading and watching video testimonies.

No moment was more powerful than when we were let inside of the gate and up to the balcony of the Lorraine Motel. Each step was more haunting than the last, like stepping back in time. We walked up to the window of Room 306, his room, looking in to see what it would have been like. Sheets mangled on the bed, a coffee cup knocked over on a tray. We stood silently looking in, and then looking out over the old parking lot towards the city. History books can’t capture what it’s like to be there. We left the museum and drove in silence back home.

Our evening was spent at the Levitt Shell, a short walk from Kathleen’s apartment. As a part of the Memphis summer series, various artists came to perform throughout the summer. Along with Kathleen’s friend, Fernando, we had the privilege of seeing St. Paul and the Broken Bones. They were absolutely incredible. The crowd was a small one, as most were probably out of town for Labor Day. But when it was time for the show to wrap up, the crowd wouldn’t let them go. If you’re a fan of soul and trumpets, go download their CD. It’s worth every penny.

Sunday was the day of the best biscuits I’ve ever eaten. Cheddar bacon and cheddar dill, warmed up on the grill. Words cannot adequately express how utterly delicious and buttery these biscuits were. My whey biscuits couldn’t stand a chance against a real Southern treat.

We spent a good chunk of time in Downtown Memphis, walking in and out of various vintage stores. But once you left Main Street, the city felt abandoned. It was full of burned down buildings and almost completely empty of human life. The few people we saw were gathered outside of The Arcade, a diner Elvis used to frequent, and in Bluff City Coffee. We took a stroll through the abandoned streets towards the river.

There it was: the Mississippi River in all of it’s glory. Once again, history books and photographs can’t quite compare to standing right there in front of it (and feeling all of the humidity). It is truly a magnificent part of nature.

Other (foodie) highlights from Memphis: muffalettas from Kwik Chek, bacon waffles from Cafe Eclectic, Nutella filled poptart from Bluff City Coffee, and fried chicken and cole slaw from Gus’s Fried Chicken. My poor arteries must be angry, but boy was it worth it.

I can’t sit still. I may live in one of the greatest cities in the world, but being in one place for too long makes me antsy. I need adventures in new places. Memphis was exactly the place I needed to go to get a refreshed sense of self and a new outlook on the world. As I sit here, enjoying my last few hours of Tennessee, I’m already planning what’s next on my travel agenda.