This is a re-print. The original post was co-written with Mike McLeod and is featured on the Writing, Rhetoric, & American Cultures webpage. 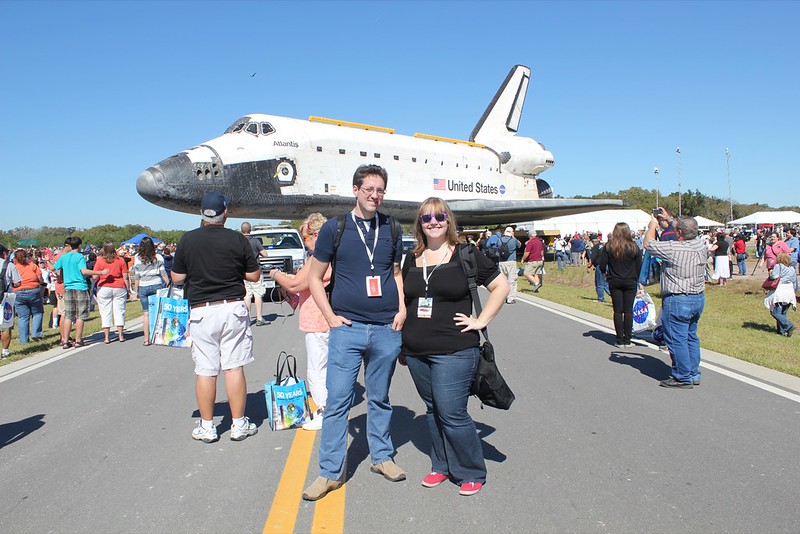 Mike and Alexandra with Atlantis

Yes, that’s two #msupw folks – Mike McLeod, faculty, and Alexandra White, alum – with a space shuttle. This happened because we were both selected to attend the NASA Social Atlantis – Celebrate the Journey event to see the Space Shuttle Atlantis be permanently retired from service and share that experience on social media. We attended this event first as unabashed space nerds, but we managed our nerdery well enough to strategize our writing to document the experience for ourselves and for our audiences. Here we’ll reflect on the rhetoric of the event, our social writing strategies, and shamelessly geek out over space.

NASA Social is a semi-regular event NASA has been hosting since 2009 in which members of its social media following are invited to high-profile events and given media credentials, affording them some behind-the-scenes access that the general public never gets – NASA calls this “pulling back the curtain.” These events vary from the launches of satellites and space shuttles to speaking events with NASA celebrities and, in our case, the retirement of famous spacecraft. 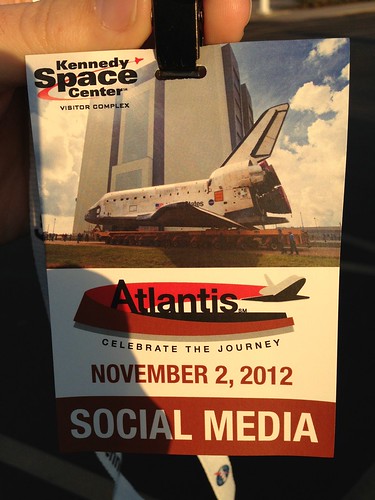 As social attendees we were under no obligation to produce content. There were no expectations in terms of the types of content we would produce or platforms where we were expected to publish. Beyond the event organizers’ pre-arranged hashtags (#NASASocial and #Atlantis), nothing specific was asked of us other than that we somehow share our experience.

The two of us chose different platforms for communicating. Mike focused mostly on public updates on Twitter and private updates to Facebook. While Alexandra also used those networks, she chose to publish more broadly to other networks including Instagram, Tumblr, and Foursquare. Our days consisted of copious micro-updates to capture the moment on social networks, and in the evenings we wrote long-form blog posts recapping and reflecting on events.

I’m pretty sure that today never happened. It’s impossible right? Except for all of that digital proof. #NASASocial #Atlantis

NASA’s Purpose for the Social

Despite not having any explicit expectations from participants, NASA clearly had motive for organizing the event and inviting folks into their facilities. One goal was to build community amongst space enthusiasts. Event organizers created Twitter lists and private Facebook groups for attendees, and socialites continue to network after the event, maintaining a wiki for future attendees, a LinkedIn group, and a Facebook Alumni group.

Another goal was to build interest in STEM. We were led on tours of facilities like the massive Vehicle Assembly Building and the new Atlantis museum by their project managers, who told us in passionate detail about the work being done to the facilities to prepare them for future use. Many of them were totally naked in their desire for us to communicate the importance of STEM:

#Atlantis construction manager: “This is STEM. Everything you see today, you’re looking at STEM. Tell everyone.” #NASAsocial

The level of pride they took in their work was impossible not to notice:

The light hitting the hangar is supposed to make it shimmer like the shuttle on reentry. #Atlantis #NASAsocial twitter.com/mcleodm3/statu…

NASA’s goal that was not explicit, but that clearly underlined everything from what our guides told us down to exhibits at the KSC Visitor’s Center, was to communicate that NASA wants and needs a public and political mandate to go beyond low-Earth orbit. Without the political mandate to win the Cold War, as argued by astrophysicist Neil deGrasse Tyson in his book Space Chronicles, the Space Race would never have happened and the US would never have gone to the moon. NASA currently lacks such a mandate. Since the retirement of the shuttle, it has been forced to outsource the ferrying of American astronauts to the International Space Station temporarily to the Russians and later to American contractors. Their ambitions, however, are to leave Earth orbit and sent humans to asteroids and later to Mars.

In this press conference (hear Mike ask a question at 31:23 and Alexandra at 48:04), project managers describe the new vehicles they are building as “general purpose” that can support a “variety” of missions beyond low-Earth orbit, but there was no list of specific timelines or goals. Likewise, an exhibit in the KSC Visitor’s Center called “The Future of Human Space Exploration” focused heavily on interplanetary travel but in a painfully non-specific way, talking about how NASA is currently “laying the groundwork” for such missions and talking about places humans might go, like back to the moon, asteroids, and Mars, but not when.

In short, NASA wants you to know that, while they celebrate the history and contributions of the space shuttle, they are focused intensely on going further than the shuttle allowed. They are doing everything they can to remain innovative and active in space and to pursue the goals of taking humans beyond low-Earth orbit again despite having the funds or public will to do so. There are indicators that President Obama may have been waiting until re-election to announce funding for a new lunar and Mars missions, but in the meantime, NASA will continue to lay the groundwork.

How We Experienced The Social As Writers and Professionals

NASA Social was certainly a special exercise of our writing skills. Much of the WRAC curriculum orbits about the importance of audience and writing with a purpose. In this situation, our audiences were our social media followers, and we used the event hashtags to build a bigger audience and reach the community following the event. Our purpose, outside of the purposes the Social had for organizing the event, was simply to document the experience and share our enthusiasm:

The relationships we formed with our fellow NASA Social members and our guides, such Deputy Director of Social Media for NASA Jason Townsend, have continued beyond our two days in Florida. We’re still connected via Twitter and the Facebook group. Some connections were valuable enough to pursue in other ways, via LinkedIn connections and Facebook friendships.

Have you attended a #NASASocial? Let’s grow the community. Encourage others to apply & engage with @nasa: nasa.gov/social

Now We Shamelessly Geek Out Like NASA Wants Us To 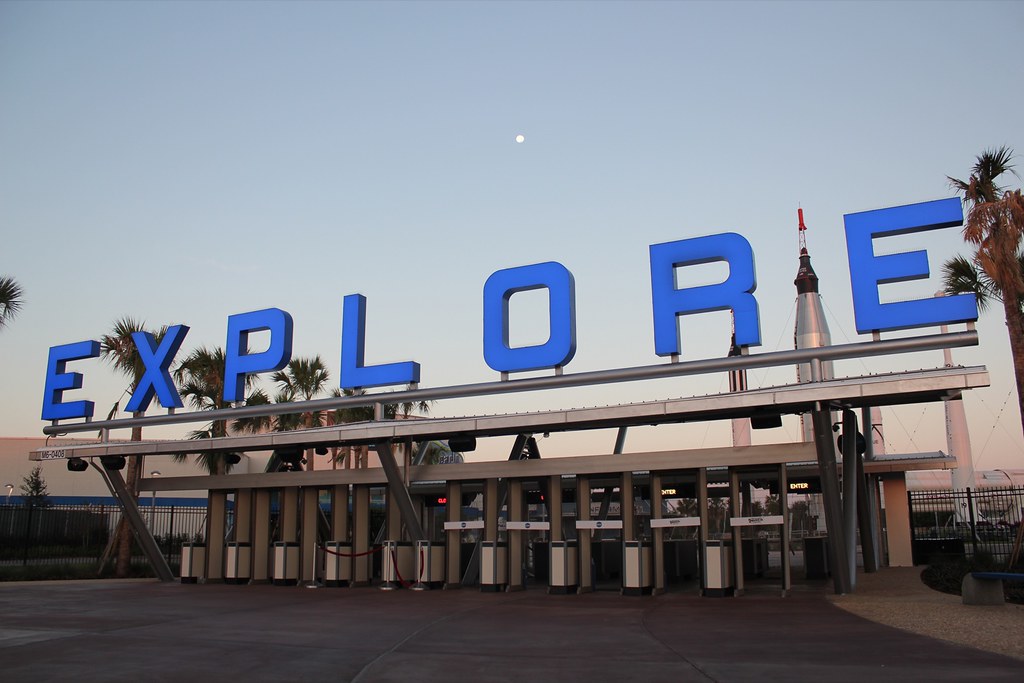 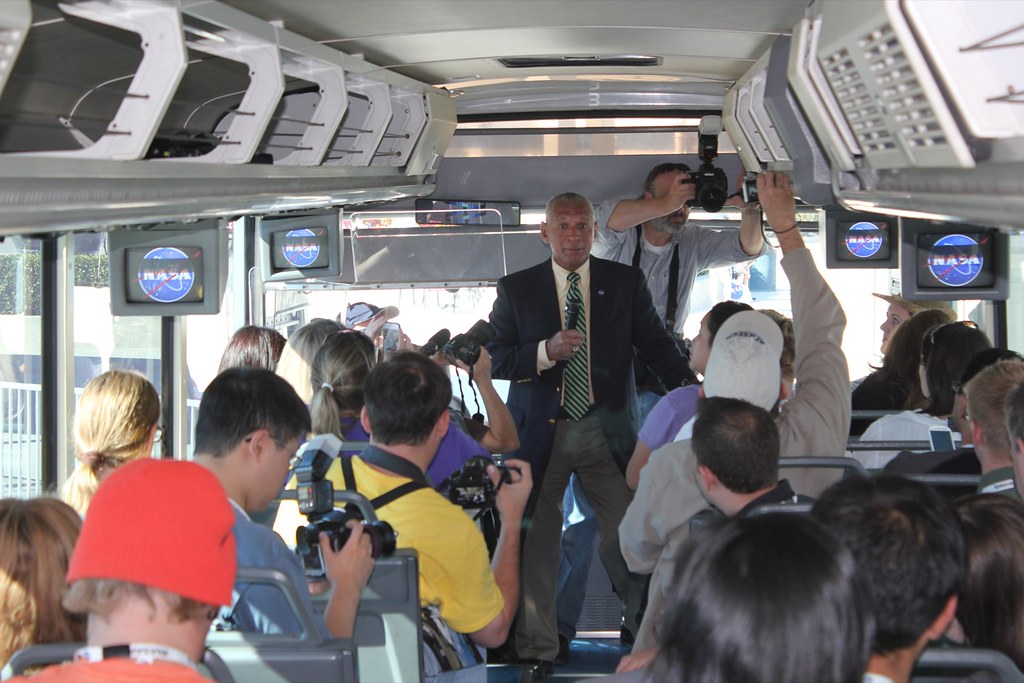 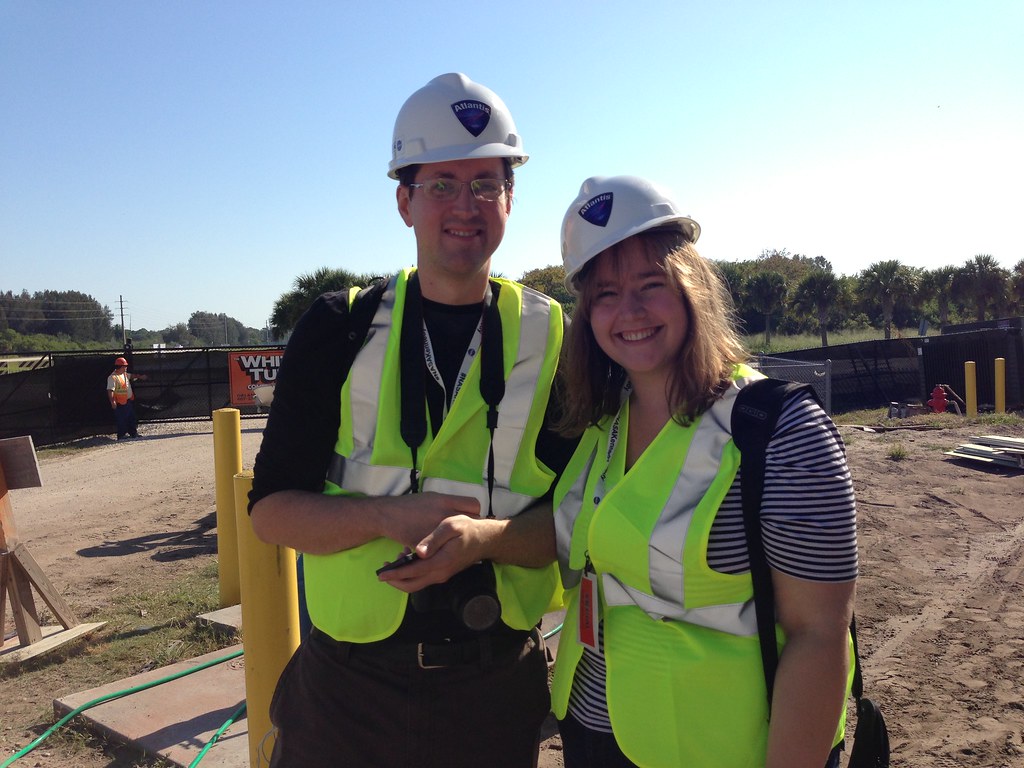 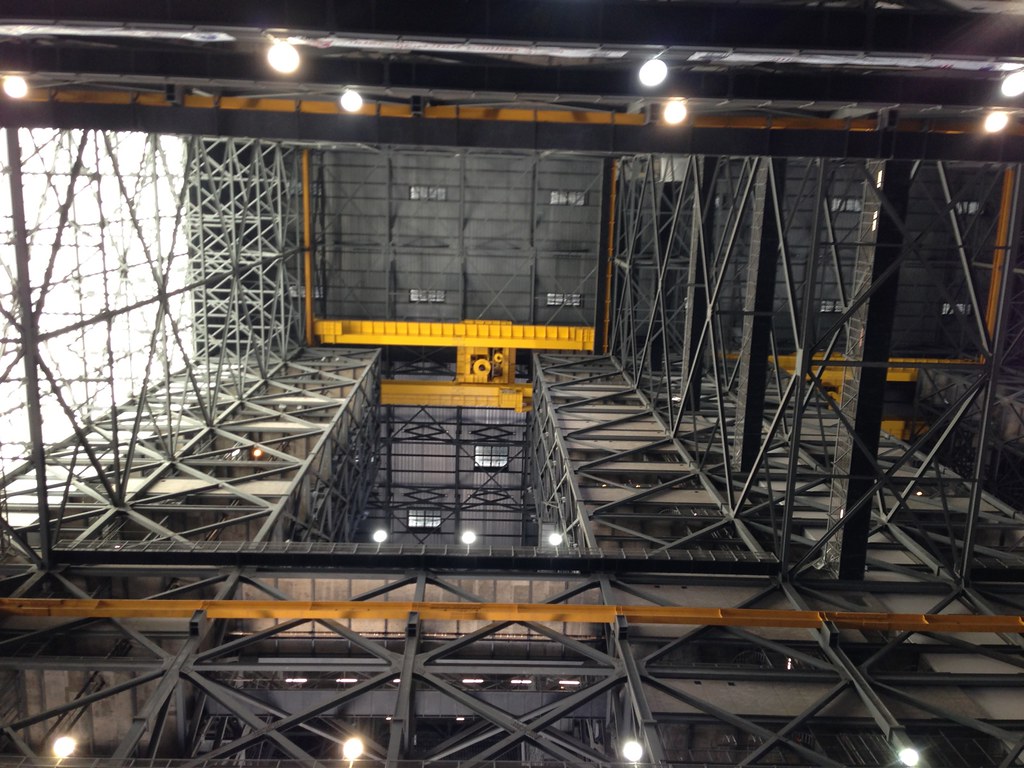 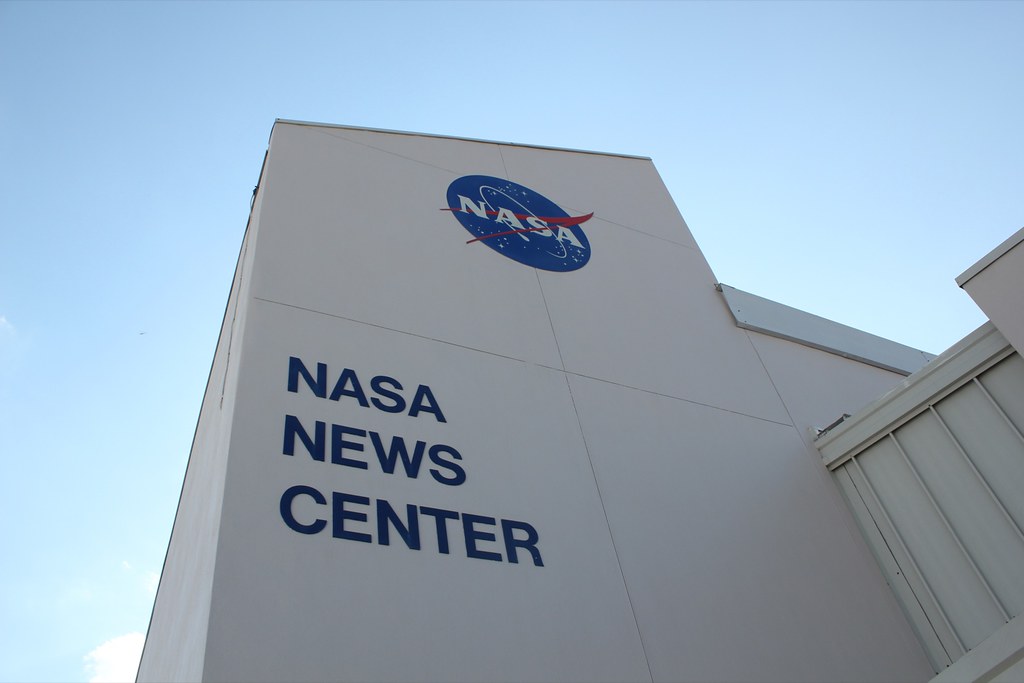 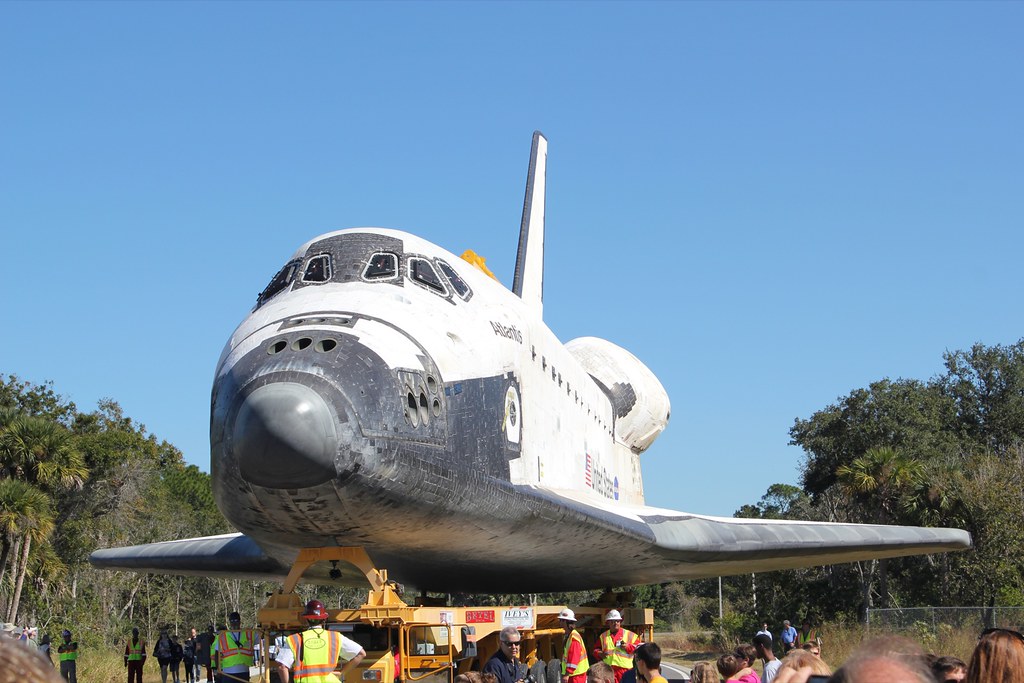