Every two years I redesign my website. It’s an opportunity to be up on modern web design trends, find gaps in content, and re-position the way I think about my skill set. It’s also a way to make sure I still know what my theme looks like inside and out, so that if I do encounter any problems, I know how to fix them.

For this redesign, I decided I wanted to accomplish the following:

This site is one of the most important selling points for why you’d want to work with me. I want to make it easy to navigate, while being completely and utterly me.

END_OF_DOCUMENT_TOKEN_TO_BE_REPLACED

On November 9th, 2016, I spent most of the day in anguish. Like many of my friends (and much of the United States), I wasn’t just disappointed. I was devastated. I was afraid for my friends of various backgrounds, afraid for my LGBTQ friends, and afraid for myself. I knew that it was probably that reproductive rights would be rolled back in the new administration. I had been receiving free birth control thanks to the Affordable Care Act and able to make my own choices about what was right for my body.

Unfortunately, that was going to come to an end. I knew I needed to do whatever I could to protect myself before it was too late and birth control became something too expensive to maintain on a monthly basis.

I made an appointment with Planned Parenthood for December of 2016 to get an IUD, without knowing much other than I could be protected for up to twelve years with a one time procedure. For the time being, it was covered, meaning that my IUD would be completely free. It seemed almost stupid not to do it.

END_OF_DOCUMENT_TOKEN_TO_BE_REPLACED

Today will be my last day as Web Developer in WNET’s Interactive Engagement Group, just two weeks shy of my two year anniversary. Monday, August 1, will be my first day as Documentation Editor at Joyent.

I had been thinking about my next move for a while – I suppose you could call it the two-year itch, the one that young professionals seem to get early in their careers. For the first time in my life, I was being actively recruited by various organizations looking for front-end developers (or back-end engineers, for which I was not the right fit). Recruitment is a funny thing. It’s nice to start practicing what it will be like when you put yourself out there for new positions, as well as potentially open an opportunity that you may not have come across otherwise.

Joyent came to me through a more old-fashioned method: in-person networking. Instead of a recruitment email, it was me sitting at the hotel bar after the first day of O’Reilly’s Velocity Conference and talking to a potential new friend about ourselves and our goals for the conference. I did a good enough job convincing this gentleman that I believe in the importance of documentation for developers, so much so that it sent me down a path of phone calls and interviews about a role they were just creating for someone just like me.

END_OF_DOCUMENT_TOKEN_TO_BE_REPLACED

This was originally written and posted on the Interactive Engagement tech blog for WNET.

I’ve learned a lot since I started working at IEG in August 2014, from building better WordPress themes via MVC to the ins-and-outs of git (how I got by before, I’ll never know). The greatest tool that I’ve embraced in my tenure is Sass. For those unfamiliar, Sass is a CSS preprocessor which takes giant complex stylesheets and neatly organizes them into tiers. There are so many features which will make your development process cleaner, faster, and happier.

END_OF_DOCUMENT_TOKEN_TO_BE_REPLACED

Responsive web design is a buzz word that we are very familiar with at IEG. All of our modern sites fit that bill (we do have some that are quite old), and you can see it in action with the resize of your browser. The excess design falls away, the menu becomes a hamburger (which, has its own problems), sidebars slink below the content. But just because it fits a certain width parameter, doesn’t mean it works for mobile. 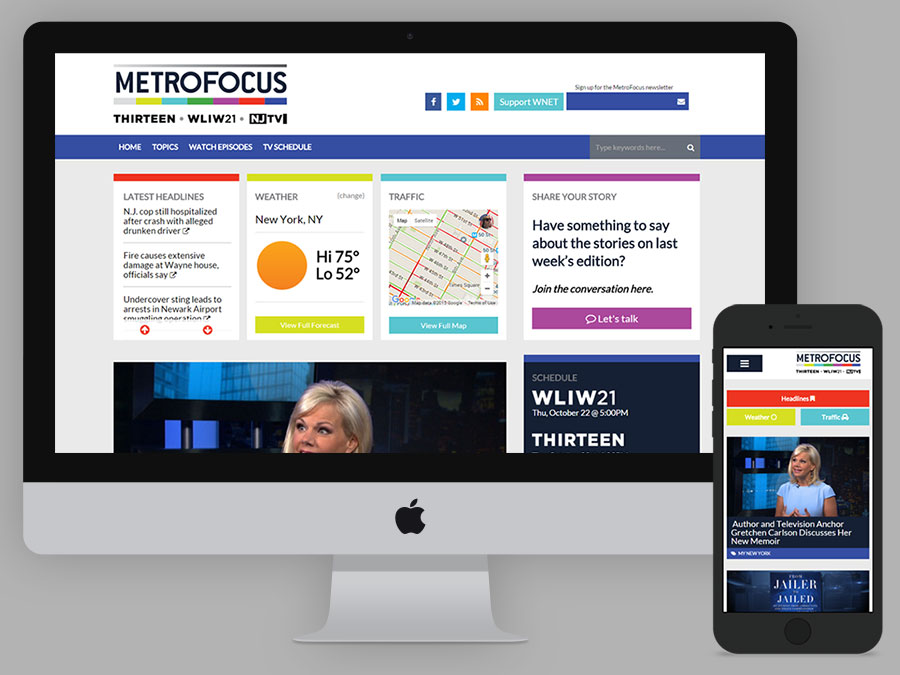 I just finished rebuilding the site for MetroFocus, a multi-platform news program focusing on the New York region. I got to a point where I was happy with the design, with the responsiveness, and we sent the site to our app developer to do some testing. He came back with incredibly insightful feedback when it came to thinking about actually using the site on a mobile device. The header and menu took up too much precious real estate and disappeared from view on scroll. The hamburger was small and surrounded by un-clickable (or, un-touchable) white space.

While the site looked good on a narrow browser, it wasn’t user-friendly for smartphones. I took his notes and spent a long time on my smartphone, clicking through and trying to think beyond “does this look good” and “is it broken” to thinking about the user’s experience on their phone. I can’t be spot on for every device and every situation, but we came to a place that is 100% better across the board.

END_OF_DOCUMENT_TOKEN_TO_BE_REPLACED

I’m so thrilled to announce that a show I stage-managed for FringeNYC, The American Play, was selected for the Fringe Encore Series. This means, we get to do our show in an Off-Broadway space, a HUGE honor for all of us.

I said goodbye to Michigan State’s theater program five years ago. I quit acting and designing costumes, except for a final tour of a children’s show that allowed me to get my minor. I never thought that when I moved to New York, I’d end up working on shows, let alone one that was so incredible. It has been a taxing but very rewarding experience.