First off, my apologies for the lack of photographs. WordPress on the iPad is not so conducive to multimedia posts. I will populate the blog with images as soon as I have a chance back in the States. In the meantime, you can catch some live-action tweets and photos on my Twitter feed. I’ll try to keep updating as much as possible.

It’s been quite a real first day in Krakow. We started off bright and early with breakfast at the Hilton Garden Inn. There was a large spread of cheeses, meats, eggs, yogurt, and pastries. It felt very Polish but with a hint of the American attitude towards food. Neither my brother or I could complain. It was good we had a big breakfast, with several hours of walking ahead of us.

We headed straight towards the main square (the largest medieval “main square” in all of Europe, according to our tour guide) for the Free Walking Tour. I had taken several walking tours while in Europe last year (all with Sandman’s New Europe), and I took some time to investigate our options in Poland. We were certainly not disappointed. Fun fact: in most European cities, you’re led around by foreigners who speak English well and have settled in their new city. In Poland, this is not the case. Tour guides are required to take a year-long course (which is only offered in Polish) and many exams in order to receive their license. It can definitely make a difference to be led around by a local.

Gosha, our guide, was wonderful. We started off in front of St. Mary’s church with an introduction to the history of Krakow. No one can truly say when it was established (was it the 8th century when a king declared Krakow a city? Was it in the 10th century when Krakow was first mentioned in historical writings? Or was it in the 12th century?). Poland hasn’t seen a lot of independence since the mid-1700s, as it was overtaken and split between Russia, Prussia, and Austria until 1918, followed by the Nazi occuption 20 years later, followed by Communist rule. With all of the changes of rulings, the city remains (for the most part) intact. There are a few buildings that have remnants of other rules, but it’s clear that the city is Polish.

We stopped at a theater said to be cursed due to issues with construction (someone tore down a church to have it built); saw the only remaining original city wall (the Austrians demolished the rest. This one piece was left up because a Polish man said that the wall blocked heavy winds from outside of the city. If these heavy winds got through, what would happen to a lady’s skirt when leaving St. Mary’s?); learned of the Krakovian dedication to Pope John Paul II; and spent some time at Wawel Castle (home to the “best example of Nazi architecture outside of Germany” and a dragon). On the tour, my brother and I met Conner, a UC Santa Barbara student studying in Germany. Because we’re our parent’s children, of course we found a way that we were connected to this random new friend. Conner had a close friend from high school who attends Michigan State University and has come to visit for the 2011 football match against the University of Michigan. The only thing that would have been better would have been to meet an actual Spartan.

Walking tours truly are the best way to get the sense of a city. There is so much to see and so much history to stumble upon. And having a guide who knows their stuff is pretty helpful, too.

After the tour, we made the all important lunch stop for pierogis. I could go on and on about how delicious (and inexpensive) the giant plate of meat goodness was, but I’ll refrain. I’ll just say that there really is a difference between a homemade polish pierogi and the frozen variety from your local supermarket.

Philip and I did a bit of our own exploration outside of the main square. We stopped for a bit of coffee (and battery charging) across the street from a Polish ad featuring Chuck Norris. I don’t remember what the ad was for (nor am I sure if I knew at the time).

We headed to the JCC Krakow for dinner. Before leaving, I had corresponded with Jonathan, an American born man who is the director (and one of the founders) of the four-year-old Jewish Community Center. 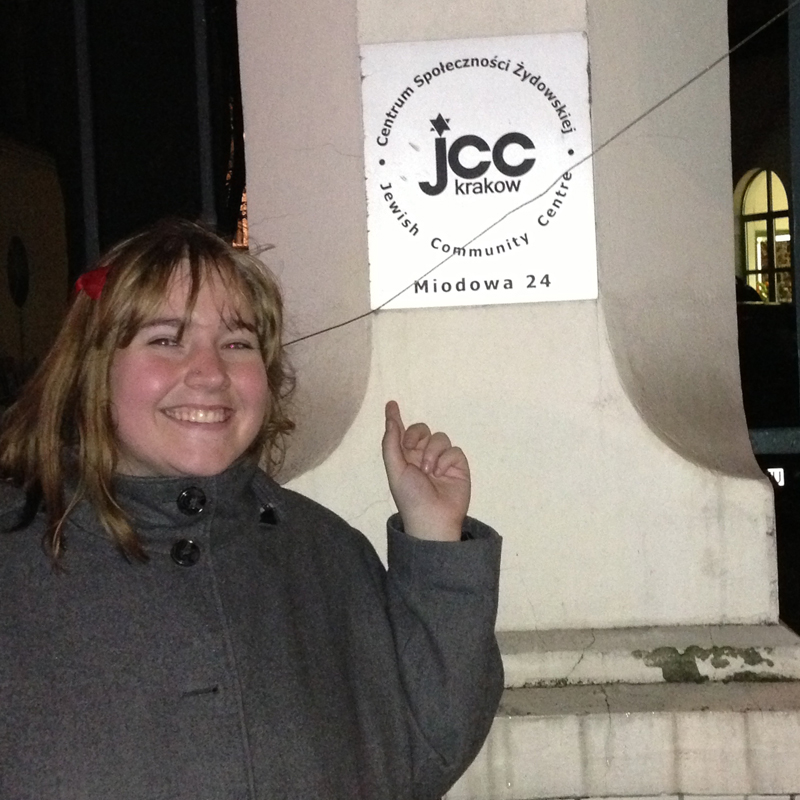 A brief version of the JCC’s story: In 2002, Prince Charles (yes, THAT Prince Charles) came to visit on official business. He met with some of the people of Krakow, and heard the stories of some of the remaining survivors of World War II. He was touched, and asked, “What do you need?” Their response was a senior center. Over time, this evolved to helping revive this community of people who are interested in Judaism and some who are finding out that they have Jewish ancestry. They decided to go with the model of the JCC as a way of creating an epicenter for this community, bridging the old with the new and Building a Jewish Future. Prince Charles made it happen (and receives regular reports as to how the JCC is thriving). There are just 400 members in the JCC (occupying 4 floors and a basement, about 10,000 square feet), who are required to have some Jewish heritage. They host Shabbat dinner every Friday night and there is a variety of different people attend. Over 50 non-Jews act as volunteers to help keep the JCC up and running. There is so much interest in the history that was almost lost entirely to the Nazis, and it was fascinating to see this culture re-blooming. 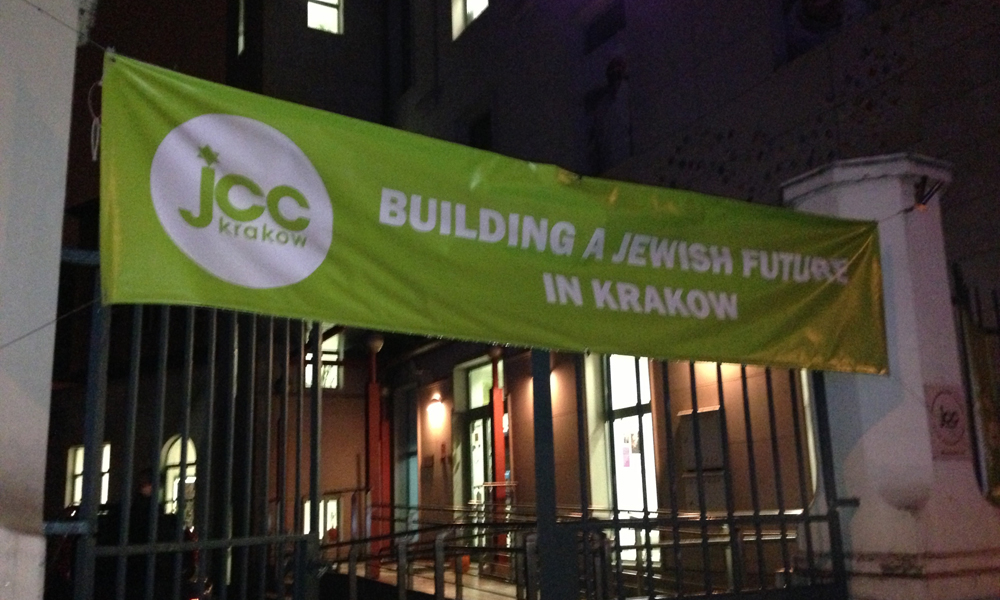 We ate Shabbat dinner with about 45 others (Israeli salad, hummus, non-egg challah, and mushroom pizza were on the menu). Across from us sat (short for Wiktoria) Adamczyk, a girl with no Jewish ancestry who came to Krakow to study Jewish Studies. She spoke of the challah and kugel that are tradition in her hometown and her fascination with the culture. She’s been to Israel once and wants to learn to speak Hebrew, “One of the most beautiful languages [she’s] ever heard.” Next to Wika were two Israeli businessmen. We didn’t learn very much about them, as they spent most of their time chatting in Hebrew with each other and with Jonathan (who had lived in Israel for 8 years prior to moving to Poland). The service was in Hebrew, with a d’var Torah in Polish, and the leaders directed us to the pages in Polish and English. Jonathan laughed and said, “This is so funny. They never say, ‘And for the English speakers.’ It’s always just in Polish.”

Jonathan introduced us to the room in Polish and then again in English. During dinner, I told him the story of how I ended up in Krakow, and he looked at me in shock. “You mean to say you could have gone anywhere. You could have gone to Tahiti. And you came to Poland? To Krakow? I have to tell this story.” He got up and paused dinner to tell the story in Polish. My beet redness aside, everyone applauded and welcomed us even more than they already had.

After dinner, Jonathan led us on a tour of the building, where we learned all about the JCC’s history. He then proceeded to give us a giant bag of swag including t-shirts, posters, and brochures (for me to show off at the JCC Association office). He made it clear how important the design and the look and feel of the JCC was to him and to the community. “We want to show that we are revitalizing a people. People think of Krakow and Poland and they think of death, gloom, and loss. Here we are with this huge Jewish community. We have no security, no metal detectors. None of the Jewish buildings, synagogues, or museums in Krakow have this, something unheard of in every other part of the world. But here. Here we are an hour and forty-five minutes away from Auschwitz.”

Talk about some powerful rhetoric.

I’m so happy that I got to take a peek inside of the community, if only for a brief window of time. Not only that, but I got to share this experience with my brother. I only wish that my father and his father could have been here to see how Krakow has grown and how beautiful it is.

The JCC is looking for a web designer. I’m sold. Now all I need to do is learn Polish.